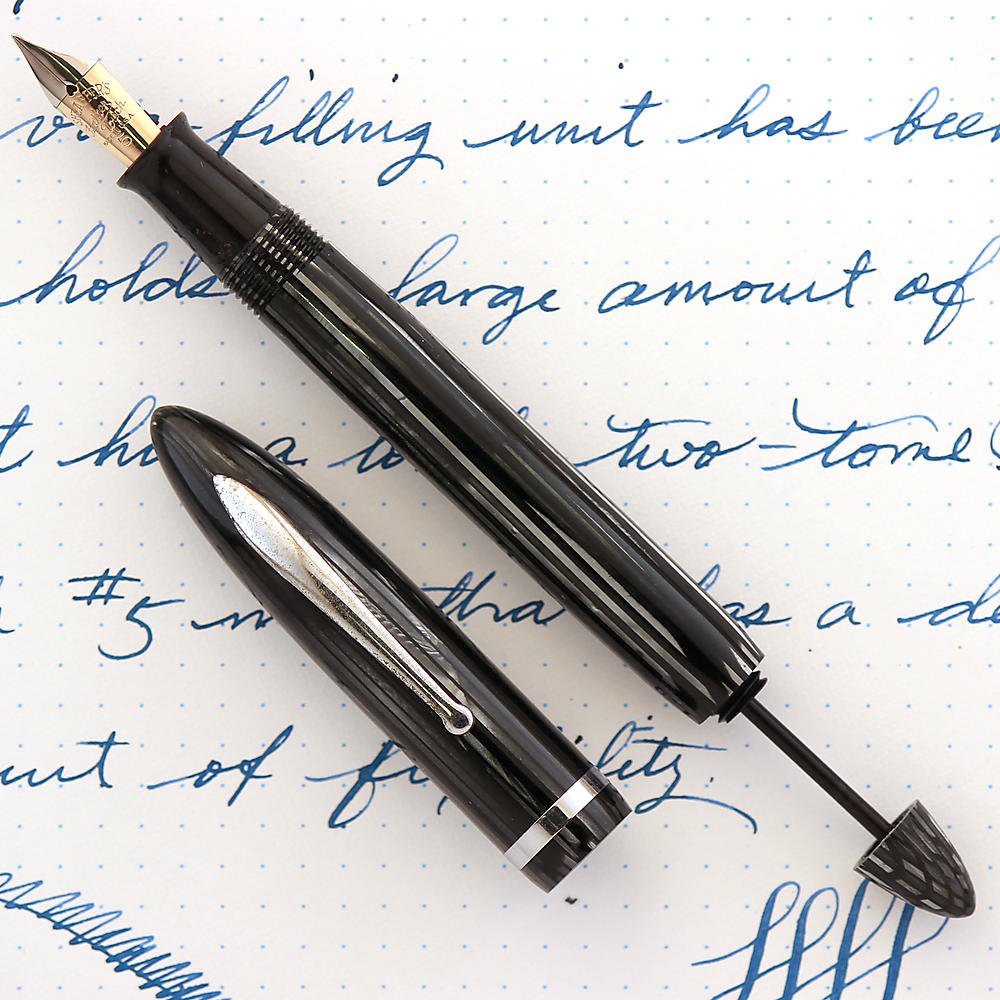 The Sheaffer plunger/vacuum ink filling system was produced by Sheaffer during the 30s and 40s up until it was replaced by the Touchdown filling system in 1949. This is probably my favorite ink filling system as it holds a large amount of ink in the barrel yet doesn’t have many of the drawbacks that something like Parker’s Vacumatic system has when trying to clean it. The drawback that it does have is that it is often difficult to restore properly, but once restored with modern materials it will last for a very long time.

These instructions will work for any Sheaffer pluginer/vacuum filling fountain pen (the one with a thin rod running into the pen, not to be confused with a touchdown filling pen that has a broad metal shaft).

Filling a the pen is very easy and straightforward.

Depending on how clear the barrel is on your pen, you should be able to see ink flooding into the barrel at the end of the downstroke of the plunger (except for some models from ca. 1947-48 that do not have transparent barrels). Depending on the pen, you’ll see your barrel half to three-fourths full of ink.

This pen fills on the downstroke by creating a vacuum in the barrel which is released when the plunger reaches the bottom of the down-stroke. Repeating the filling action won’t really fill the pen up with any more ink than a single stroke because the second downstroke will push out any ink that is in the barrel. You may get a little more, but not much.

If there is any ink left in your pen when you want to change inks, you can empty the barrel pretty easily by using the same method you would for filling it. Just pull the plunger out and push down over your ink bottle to put the rest of the ink back in the bottle (or over the sink to get rid of it).

Cleaning the pen is a simple matter of flushing the pen with clean, cold water. Get a glass of water and do the same method as filling with ink and repeat until the water runs clear. When done set the pen aside to dry.

Some things to watch for

When you pull the plunger out when the pen is full of ink or water there will be fluid behind the plunger which creates pressure against the packing unit (where the rod goes into the barrel of the pen). The plunger is designed to let the fluid past it easily, but sometimes this pressure can cause the packing unit to fail if it was not restored correctly (which happens sometimes). This will cause ink or water to leak up through where the rod enters the pen. If this happens you should contact the person who did the restoration and ask about getting it fixed (which would be me if you purchased it from me).

The rod and barrel of the pen should have been lubricated so the plunger goes in and out freely. Over time it would be a good idea to put a light coating of silicone grease on the plunger shaft if it becomes difficult to push in and out.